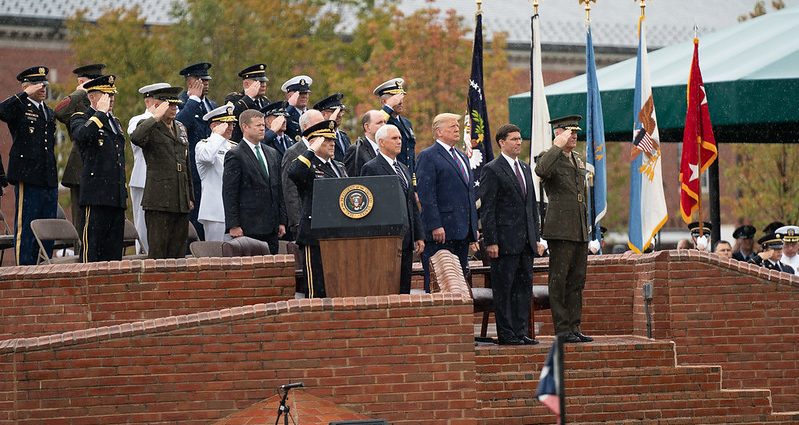 Yesterday, President Donald J. Trump participated in an Armed Forces Welcoming Ceremony to honor Gen. Mark A. Milley, who became America’s 20th Chairman of the Joint Chiefs of Staff. Milley takes over for Marine Gen. Joseph F. Dunford, who is retiring after years of exceptional service to our country.

“We’re gathered together for a truly historic occasion,” the President said at Joint Base Myer-Henderson Hall in Virginia.

Gen. Milley, now the President’s top military advisor, brings an impeccable record to this crucial role. Throughout his 39 years of service, he has held multiple command and staff positions in eight divisions and Special Forces teams. Most recently, Gen. Milley served as the 39th chief of staff of the U.S. Army.

“Joe solidified America’s competitive advantage through global integration of the Joint Force. He also provided critical leadership during the complete rebuilding of our military,” the President said. A big part of that legacy is providing the crucial, strategic direction to the campaign against ISIS in Iraq and Syria. It was Gen. Dunford’s brilliant leadership that guided our courageous service members to a resounding victory over the Islamic State territorial caliphate, now 100 percent obliterated.

“General, your life exemplifies those words that beat in the heart of every Marine: Semper Fi. America salutes your incredible legacy of noble service.”

As one exceptional leader departs, America gains another. Gen. Milley takes over as the highest-ranking member of the most skilled and powerful military in human history. And thanks to the public service of heroes like him, the best is yet to come.