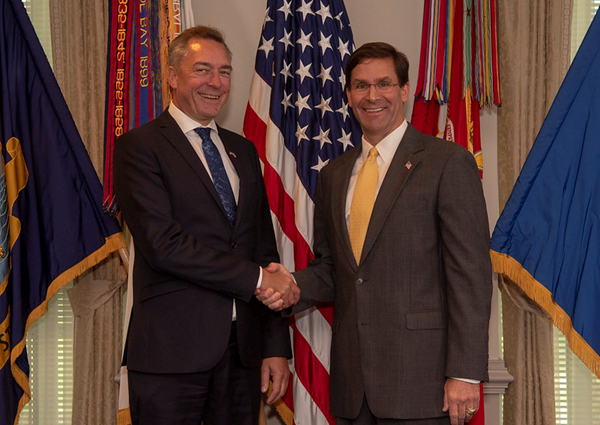 – United States is Norway’s closest and most important ally

Defense Secretary Dr. Mark T. Esper welcomed Norwegian Defense Minister Frank Bakke-Jensen to the Pentagon for talks on the U.S.-Norway partnership and the way forward for the NATO alliance.

Bakke-Jensen and Norwegian Prime Minister Erna Solberg visited U.S. Marines and sailors in North Carolina and Virginia. Bakke-Jensen said he enjoyed meeting the Marines — many of whom deployed to Norway — and specifically cited the establishment of the U.S. 2nd Fleet in Norfolk as a concrete example of the U.S. commitment to Europe.

“The security relationship between the United States and Norway is robust and only continues to grow,” Esper said at the beginning of the Pentagon meeting. “As co-founders of NATO, we share similar priorities, similar values of democracy and human rights and the desire to invest in a stronger alliance.”

“Among all of your efforts, I appreciate Norway’s steady defense spending over the past several years,” Esper said. The shared defense spending is needed to deter adversary aggression, the secretary added. Norway is on track to achieve NATO’s goal of member nations spending 2% of their gross domestic product on defense by 2024.

Esper was asked about U.S. aid to Ukraine. “Since my confirmation in late July, the department has been focused on a few things, and these things largely apply to any country for which we provide security assistance,” Esper said. “First and foremost, what is the value of [security assistance] for a nation’s defense and deterrence?”

A second question department officials must ask is if there is any corruption within the nation that must be taken into account, the secretary said. “And thirdly,” he said, “to what degree can we have other allies share in providing security assistance to these countries?”

The aid to Ukraine is almost totally obligated now, “and at no time … has delay in this money affected U.S. national security,” Esper said.