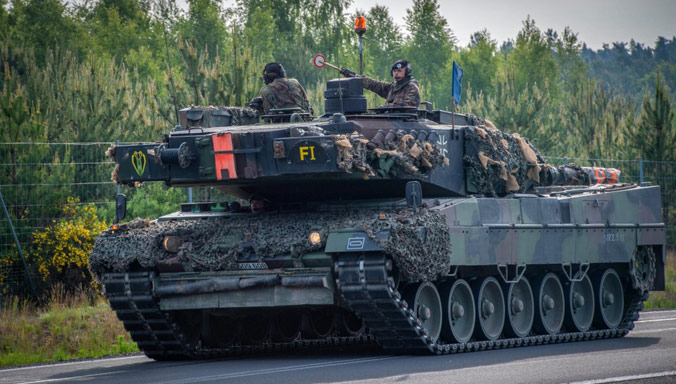 A force of 2,500 German, Dutch and Norwegian troops and 1,000 vehicles is currently taking part in exercise Noble Jump 19 at the Zagan training range in Western Poland. Noble Jump is the main training opportunity for NATO’s Spearhead Force, the Very High Readiness Joint Task Force (VJTF), and tests how well its different units work together.

Training in Zagan will include defence against enemy tanks and infantry, finding and destroying mines as well as artillery practise.

To start the exercise, the NATO force assembled and then deployed quickly across European borders. Some 1,700 German troops and 600 vehicles and 70 tanks from bases in Germany deployed to Oberlausitz training area near Chemnitz. At the same time, hundreds of troops and tanks from the Norwegian Army’s Telemark battalion also deployed. All forces then linked up at Zagan in Poland. The rapid speed of the deployment of forces from Germany, the Netherlands and Norway shows the progress that has been made in recent years to increase the readiness and mobility of NATO’s military forces.

The VJTF is provided by allies in rotation and includes several thousand troops, ready to respond where needed with air, sea and Special Forces support. It is part of the Alliance’s larger NATO Response Force (NRF). This year, the 1st German / Netherlands Corps is in charge of the VJTF’s land forces. Admiral James Foggo commands the entire NRF from NATO’s Joint Force Command in Naples, Italy.  NATO Heads of State and Government agreed to create the VJTF at the Wales Summit in 2014, in response to a changed security environment, including Russia’s aggressive actions against Ukraine and instability in North Africa and the Middle East.

2019-06-07
Previous Post: Iran – USA: Both parties are playing with the red line
Next Post: Kongsberg Awarded NASAMS Contract With Australia Worth 1.6 Billion NOK