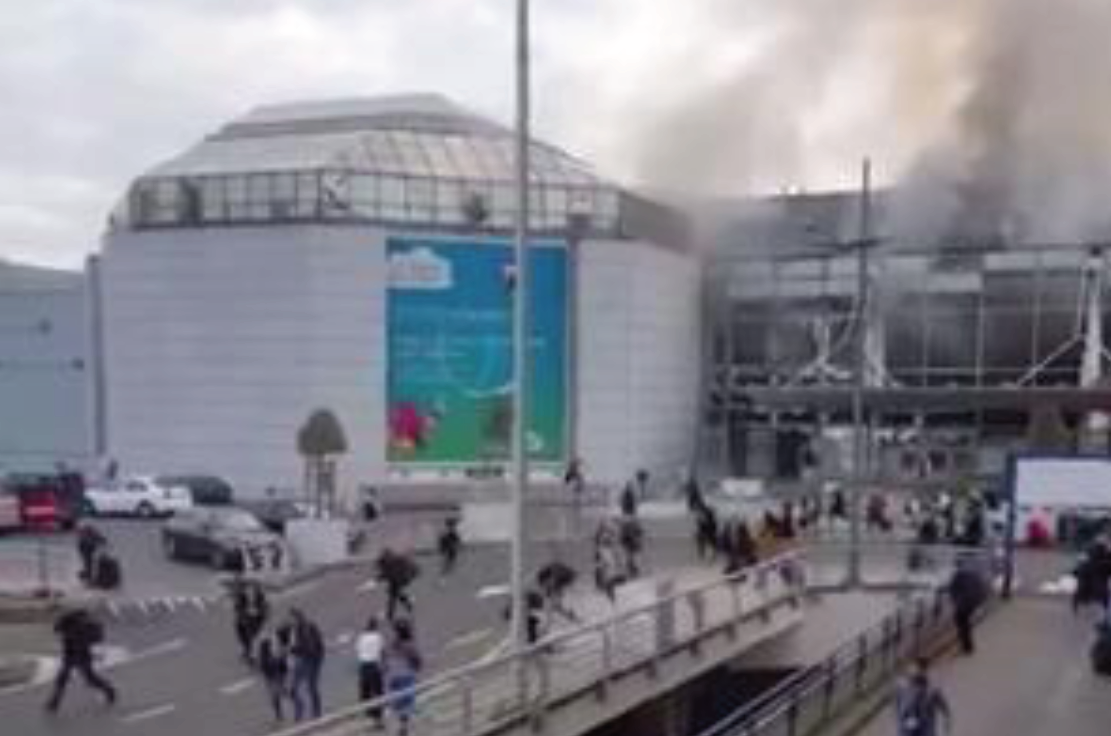 Report from the ground: Brussels Terrorist Attacks at Airport and European Parliament 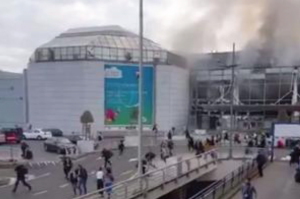 Brussels attacks: – I was headed out to the Zaventum, Brussels airport this morning but was stopped by panic calls received from friends – some in tears – as I was about to take my taxi. Explosions at the airport – bombs. The Guardian is reporting ten dead, more injured. In addition to the two airport explosions a metro stop near the European Union, has also been attacked and the Telegraph is reporting twenty three dead and thirty five injured. I’m staying in the hotel…and wondering what I can do to volunteer to help …too many victims today.

Many arrive with large suitcases and in cars, so it is easy for a terrorist to arrive in a car with a big bomb in a suitcase leave it as we see now at the American Airlines desk in this case, run back to the car, detonate it from outside and drive away. Horrible. And that can happen at any airport….except perhaps Ben Gurion.

There is one ISIS video that shows a shooter attacking the departure hall so evidently they’ve thought of it and assault guns are so easily available in the United States. The ISIS video shows a “game” in which the shooter takes out people in the airport as they either arrive or depart. But in Brussels this was no game and it tells us we now have to take these types of attacks as a real possibility. A Belgian prosecutor, according to the Telegraph is saying the airport attack was a suicide bomber…

The Belgian cell that ISIS used to attack Paris obviously is alive and well. And they likely sped up their plans for more attacks in Europe because they know their newly arrested cadre Salah Abdeslam is talking… Of Europeans, Belgium also has the most per capita foreign fighters who have gone to Syria – over five hundred. Belgium also has approximately one hundred and twenty-five returnees from the conflicts in Syria – many of them having been in groups like ISIS and Jabhat al-Nusrah. Half of these are free on the streets. One ISIS returnee, who had no visible remorse over the Paris attacks, told me in a interview here in Belgium, that he still wants the “caliphate” in Belgium and felt comfortable that it would likely require bloodshed.

“You shed blood to get your American revolution,” he chillingly told me. He also said he’d return immediately to Syria if he was free to do so. It begs the question – what is he doing out on the streets? There are clear and real issues here in the Muslim Moroccan immigrant community that need to be addressed from both sides of the equation. Youth with names like Fatima and Jamal face discrimination and marginalization in housing, jobs and even in going to nightclubs where they may literally be told, “Go home Moroccan.”

Many have told me they had to change their names and appearance to work in a white Belgian establishment and Belgians have told me the same – that they asked their Moroccan Belgian employees to hide their heritage. But the anger that has been simmering for years over these issues has now had the gasoline of a terrorist group and violent ideology poured over it. The promise of the newly formed “caliphate” and it’s spread over the world with the allure of dignity, purpose, meaning, a job even – and a wife (and sex that can come as a result, not to mention the sex slave) are enticing hundreds and seems to be filling a hole in the hearts of angry young men here and redirecting them as well—into vile acts of terrorism. Sadly this is likely only the beginning in Brussels. Brace for more possibly…

Reported from on the ground in Brussels, Belgium. March 22, 2016

About the writer – Anne Speckhard, Ph.D. : She is Adjunct Associate Professor of Psychiatry at Georgetown University in the School of Medicine and is Director of the International Center for the Study of Violent Extremism (ICSVE) and is a nonresident Fellow of Trends. She is also the author of Talking to Terrorists and coauthor of Undercover Jihadi. Her newly released book, inspired by the true story of an American girl seduced over the Internet into ISIS, is Bride of ISIS. Dr. Speckhard has interviewed nearly five hundred terrorists, their family members and supporters in various parts of the world including Gaza, the West Bank, Chechnya, Iraq, Jordan and many countries in Europe. She was responsible for designing the psychological and Islamic challenge aspects of the Detainee Rehabilitation Program in Iraq to be applied to twenty thousand detainees and eight hundred juveniles. She is currently running the ISIS Defectors Interview Project with Dr. Ahmet Yayla at ICSVE. Personal website: www.AnneSpeckhard.com Reference for this article is: Reference for this paper: Speckhard, Anne (March 22, 2016) Brussels Terrorist Attacks at Airport and European Parliament. ICSVE Brief Report http://www.icsve.org/brussels-terrorist-attacks-at-airport-andeuropean- parliament.html

2016-03-22
Previous Post: Alleged ISIS operative and Paris Attacker, Salah Abdelslam, found hiding out in Molenbeek, Belgium
Next Post: The Brussels Attack: What We Should Be Doing Differently