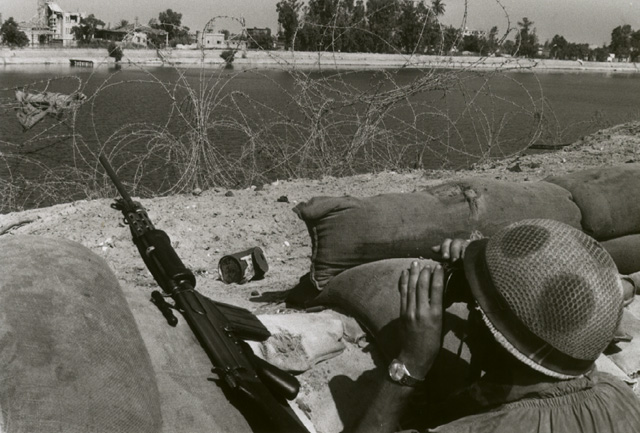 The war of attrition involved fighting between Israel, Egypt, Jordan, PLO and their allies from 1967 to 1970. Following the 1967 Six Days War, no serious diplomatic efforts tried to resolve the issues at the heart of the Arab-Israeli conflict.

In September 1967, the Arab states formulated the three nosy policy, barring peace, recognition or negotiations with Israel. Egyptian President Gamal Abdel Nasser believed that only military initiative would compel Israel or the international community to facilitate a full Israel withdrawal from Sinai, and hostilities soon resumed along the Suez Canal.

These initially took the form of limited artillery duels and small-scale incursions into Sinai, but by 1969 the Egyptian Army judged itself prepared for larger-scale operations. On March 8, 1969 Nasser proclaimed the official launch of The War of Attrition, characterized by large-scale shelling along the Suez Canal, extensive aerial warfare and commando raids. Hostilities continued until August 1970 and ended with ceasefire, the frontiers remaining the same as when the war began, with no real commitment to serious peace negotiations.

Israel’s victory in the Six Days War left the entirety of the Egyptian Sinai Peninsula up to the eastern bank of Suez Canal under Israeli control. Egypt was determined to regain Sinai, and also sought to mitigate the severity of its defeat. Sporadic clashes were taken place along the cease-fire line, and Egyptian missile boats sank the Israeli destroyer INS Éclat in October 21 of the same year.

The international community and both countries attempted to find a diplomatic solution to the conflict. The Jarring Mission of the United Nations was to suppose to ensure that the terms of UN Security Council Resolution 242 would be observed, but by late 1970 it was clear that the mission had been a failure. Fearing the escalation of the conflict into an East vs. West confrontation during the tensions of the mid-Cold War, the American President Richard Nixon sent his Secretary of State, William Rogers, to formulate the Rogers Plan in view of obtaining a ceasefire. In August 1970, Israel, Jordan and Egypt agreed to an in place ceasefire under the terms proposed by Rogers Plan.

The plan contained restrictions on missile deployment by both sides, and required cessation of raids as precondition for peace. The Egyptians and Soviet allies rekindled the conflict by violating the agreement shortly thereafter, moving their missiles near to the Suez Canal, and constructing the largest anti-aircraft system yet implemented at that point in history. 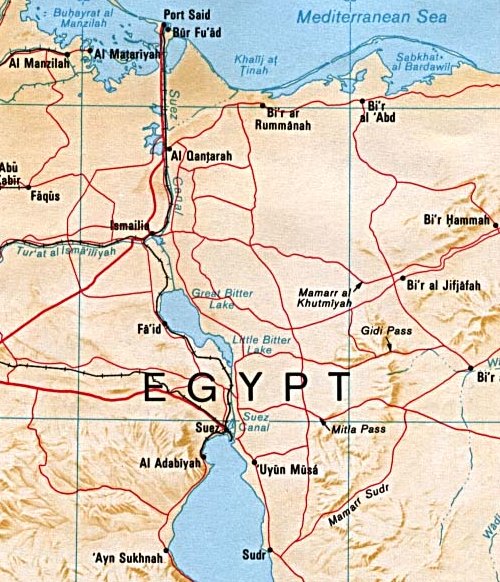 The Israelis responded with a policy which their Prime Minister, Golda Meir, dubbed “asymmetrical response”, wherein Israeli retaliation was disproportionately larger comparison to any Egypt attacks. Following Nasser’s death in September 1970, his successor, Anwar al-Sadat, continued the ceasefire with Israel, focusing on rebuilding the Egyptian army and planning a full-scale attack on the Israeli forces controlling the eastern bank of Suez Canal. These plans would materialize three years later in the 1973 the Yom Kippur War. Ultimately, Israel would return Sinai to Egypt after the two nations signed the Camp David Agreement. Various military historians have commented on the war with differing opinions. Chain Herzog notes that Israel withstood the battle and adapted itself to a “hitherto alien type of warfare”. Ze’ev Schiff notes that though Israel suffered losses, she was still able to preserve her military accomplishments of 1967 and that despite increased Soviet involvement, Israel had stood firm. Simon Dustan notes that, although Israel continued to hold the Bar Lev Line, the war’s conclusion “led to a dangerous complacency within the Israeli High Command about the resolve of the Egyptian armed forces and the strength of the Bar Lev Line”. On the tactical level, Kenneth Pollack notes that Egypt’s commandos performed “adequately” though they rarely ventured into risky operations on a par with the daring of Israel’s commandos.

Egypt’s artillery corp. encountered difficulty in penetrating the Bar Lev forts and eventually adopted a policy of trying to catch Israeli troops in the exterior parts of the forts. The Egyptian Air Force and Air Defense Forces performed poorly. Egyptian pilots were rigid, slow to react and unwilling to improvise. According to US intelligence estimates, Egypt lost 109 aircraft; most in air-to-air combat, while only 16 Israeli aircraft were lost, most to anti aircraft artillery or Sims. It took a salvo of 6 to 10 SA-2 Egyptian anti-aircraft missiles to obtain a better than fifty percent chance of a hit.

In July 1967 an Egyptian commando force from Port Fuad moves south and take up position at Ras el’Ish, located 10 miles south of Port Said on the eastern bank of the Suez Canal, an area controlled by the Israelis since the ceasefire July 9, 1967. An Israeli armored infantry company attacks the Egyptian force. The Israeli company was repulsed and defeated. However, another source claims that an Israeli attack on Port Fuad was repulsed. The Israeli Air Force (IAF) bombs Egyptian artillery positions that had supported the commandos at Ras el’Ish.

Egyptian Air Force jets strike several Israeli targets in Sinai, and an Egyptian MIG-17 was shot down. An Egyptian Air Force MIG-21 is shot down by Israeli air defenses while on a reconnaissance mission over El-Qantara. Two SU-7s equipped with cameras are sent out to carry out the mission, and manage to complete several turns over Sinai without any opposition. Two other SU-7s are sent for another reconnaissance mission hours later, but are attacked by IAF fighter jets and one SU-7s is shot down.

In October the Egyptian Navy sinks the Israeli destroyer INS Eilat killing 47 sailors. In retaliation to the sinking of the INS Eilat, Israeli bombards oil refineries and depots near Suez. In a series of artillery exchanges throughout October, the Egyptians sustain civilian casualties. Egypt evacuates a large number of civilian populations in the canal region.

In March 1968, it started with in response to persistent PLO raids against Israeli civilian targets, Israel attacks the town Karameh in Jordan the site of a major PLO camp, but is met with resistance by Jordanian and PLO forces. Despite hours of fighting, Israeli troops consolidate their hold on the Karameh camp with the aid of artillery and airstrikes, blowing up 175 houses.

They then fight their way back to Israeli territory, taking with them as much military equipment as they can, along with 120 – 150 prisoners. Both sides suffered significant casualties and material losses, but Jordan and PLO losses were far greater than Israel’s.

In September Egyptian artillery barrage kills 10 Israeli soldiers and injures 18. Israel responds by shelling Suez and Ismailia. By October Israeli helicopter-borne Secret Matkal commandos carry out Operation Helem, destroying an Egyptian electric transformator station, two dams along the Nile River and a bridge. The blackout causes Nasser to cease hostilities for a few month while fortifications around hundreds of important targets are built. Simultaneously, Israel reinforces its position on the east bank of Suez Canal by construction of the Bar Lev Line.

November 3, Egyptian MIG-17 attack Israeli positions, and are met by Israeli interceptors. One Israeli plane was damaged. In December Israeli helicopter-borne commandos destroyed four bridges near Amman in Jordan. The Israeli Air Force bombs PLO camps in Jordan, and the Israeli jets were intercepted by Hawker Hunters of the Royal Jordanian Air Force. One Israeli aircraft is damaged during the brief air battle. This war of attrition went on like this and in January 1970 Nasser secretly flies to Moscow to discuss the situation.

His request for SAM batteries was approved. Their deployment requires qualified personnel along with squadrons of aircraft to protect them. Thus, he needed Red Army personnel in large numbers, something the Kremlin did not want to provide. Nasser then threatens to resign, implying that Egypt might turn to the United States for help in the future. The Soviets had invested heavily in President Nasser’s regime, and so, the Soviet leader General – Secretary Leonid Brezhnev finally obliged. The Soviet presence was to increase from 2500-4000 in January to 10600 – 12150 in June including 100 – 150 pilots.

July 30, 1970 a large-scale of dogfight occurs between the Israeli and Soviet aircraft, codenamed Rimon 20, involving 12 to 24 Soviet MIG-21, and 12 Israeli Dassault Mirage IIIs and 4 F-4 Phantom II jets. The engagements take place west of the Suez Canal. Ambushing their opponents, the Israeli shoot down four of the Soviet piloted MIG-21s. A fifth is possibly hit and later crashes en route back to base.

Four Soviet pilots are killed, while the IAF suffers no losses except a damaged Mirage III. Following the Soviet direct intervention, known as operation, Operation Kavkaz, Washington fears an escalation and redoubles the effort toward a peaceful resolution to the conflict. August 7, a cease-fire agreement is reached, forbidding either side from changing “the military status quo within zones extending 50 kilometers to east and west of the cease-fire line”.

Minutes after cease-fire, Egypt begins moving SAM batteries into the zone even though the agreement explicitly forbids new military installations. By October there are approximately one hundred SAM sites in the zone. September 28, 1970 President Nasser dies of heart attack, and is succeeded by Vice President Anwar Sadat. According to the military historian Ze’ev Shiff some 921 Israelis, of which 694 were soldiers and the remainder civilians, were killed on all three fronts. Arab losses far exceeded those of Israel, but precise figures are difficult to ascertain because official figures were never disclosed.

Egyptian casualties are estimated to be 2882 killed and 6285 wounded. Between 98 to 114 Egyptian aircrafts were shot down, and Soviet estimated losses of 60 aircrafts. The Palestinian suffered 1828 killed and 2500 were captured. Jordan intervention on behalf of the PLO during the battle of Karameh cost it 84 killed and two aircraft lost. An estimated Soviet military personnel 58 were killed and four to five Soviet-piloted MIG-21aircraft were shot down in aerial combat.

Hundreds of Syrian casualties after Israeli raids against the Syrian positions on the border to Israel. Cuban forces which were deployed on the Syrian front were estimated to have lost 180 dead and 250 wounded.

(Photo by Israels army  – thanks)