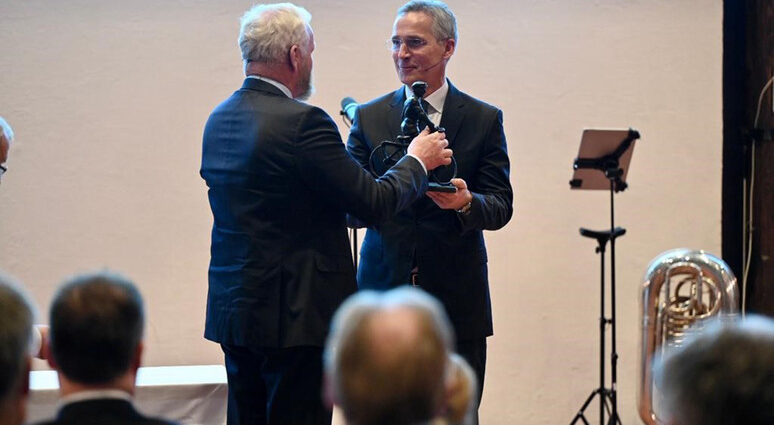 NATO Secretary General Jens Stoltenberg was awarded the Sønsteby prize on Monday 9 January 2023 at a ceremony in Oslo, Norway.

NATO Secretary General Jens Stoltenberg was awarded the Sønsteby prize on Monday (9 January 2023) at a ceremony in Oslo, Norway
The award is named for Gunnar Sønsteby, Norway’s most decorated war hero, and is given to “brave defenders of fundamental democratic values”. In his acceptance speech, Mr Stoltenberg called the award “above all a recognition of NATO, and not least of the thousands of women and men in uniform, who are always on duty”.

Remarks by NATO Secretary General Jens Stoltenberg on the occasion of receiving the Sønsteby Prize, awarded annually by the Gunnar Sønsteby Memorial Fund

Thank you very much,
Dear all,
Thank you so much for the Sønsteby award and for the kind words.
For me, this is above all a recognition of NATO.
And not least of the thousands of women and men in uniform, who are always on duty.

Gunnar Sønsteby was Norway’s most decorated war hero.
For his leadership of the resistance work here in Oslo during the Second World War.
For his personality and his courage.

Through five years of war, Gunnar Sønsteby fought for freedom.
When peace was won, he spent the rest of his life helping to ensure that we would never experience war again.

He travelled around and inspired people all over the country.
Quietly and humbly, he told the audience about the coup against Norges Bank, the action against the aircraft warehouse at Bjølsen and the explosion of Kongsberg Våpenfabrikk.
His message was simple:
We must never take peace for granted.

Gunnar Sønsteby grew up in the interwar period.
He was the first to tell me that those who grew up then thought they were growing up in a post-war era.
The First World War was, after all, the war to end all wars.
“The war to end all wars”.
The belief in “peace in our time” was strong.
Because the First World War had been so cruel, so devastating. No one could imagine that anything like it could happen again.
Yet it happened again.
Only more horrible.

Now our peace is threatened again.
There is war in Europe.

President Putin chose to attack a free and democratic country.
The Ukrainian people are subjected to enormous suffering.
They are under constant attack.

We must support Ukraine.
As NATO and NATO allies have done since 2014, and as even more are doing now.
Also Norway, that is good.

And we must prevent the war from spreading into a major war on our continent.

That is why NATO has deployed more forces, increased preparedness, and is spending more money on defence now than before.

Not to provoke a conflict.
But to prevent war.
Secure peace.

Gunnar Sønsteby understood better than most that to achieve that, we need a strong defence and a credible defence alliance.

He was absolutely right.

Two world wars and the Cold War have taught us that our security depends on North America and Europe standing together.

It is enough to go to the war cemeteries in Normandy in France and Flanders in Belgium to understand the seriousness of this message.

I have been there.

Where thousands of American and Canadian soldiers rest in European soil.
And the war in Ukraine reminds us again how important cooperation across the Atlantic is for our security.

It also gives America something that no other major power has.
Friends and allies in NATO.
It also strengthens US security.
Together we are safer.

In an uncertain time, it is even more important that we have solid international institutions.
NATO, the EU and the UN are all results of the Second World War.
Established to build a world order not where might is right. But where law and justice are applied.
Where conflicts are resolved at the negotiating table, not on the battlefield.

Gunnar Sønsteby risked his life for freedom and democracy.
As thousands do in Ukraine today.
And as our soldiers are willing to do when required.
This is how war heroes become peace heroes.
So that our post-war period never becomes another interwar period.

Thank you very much for the award!