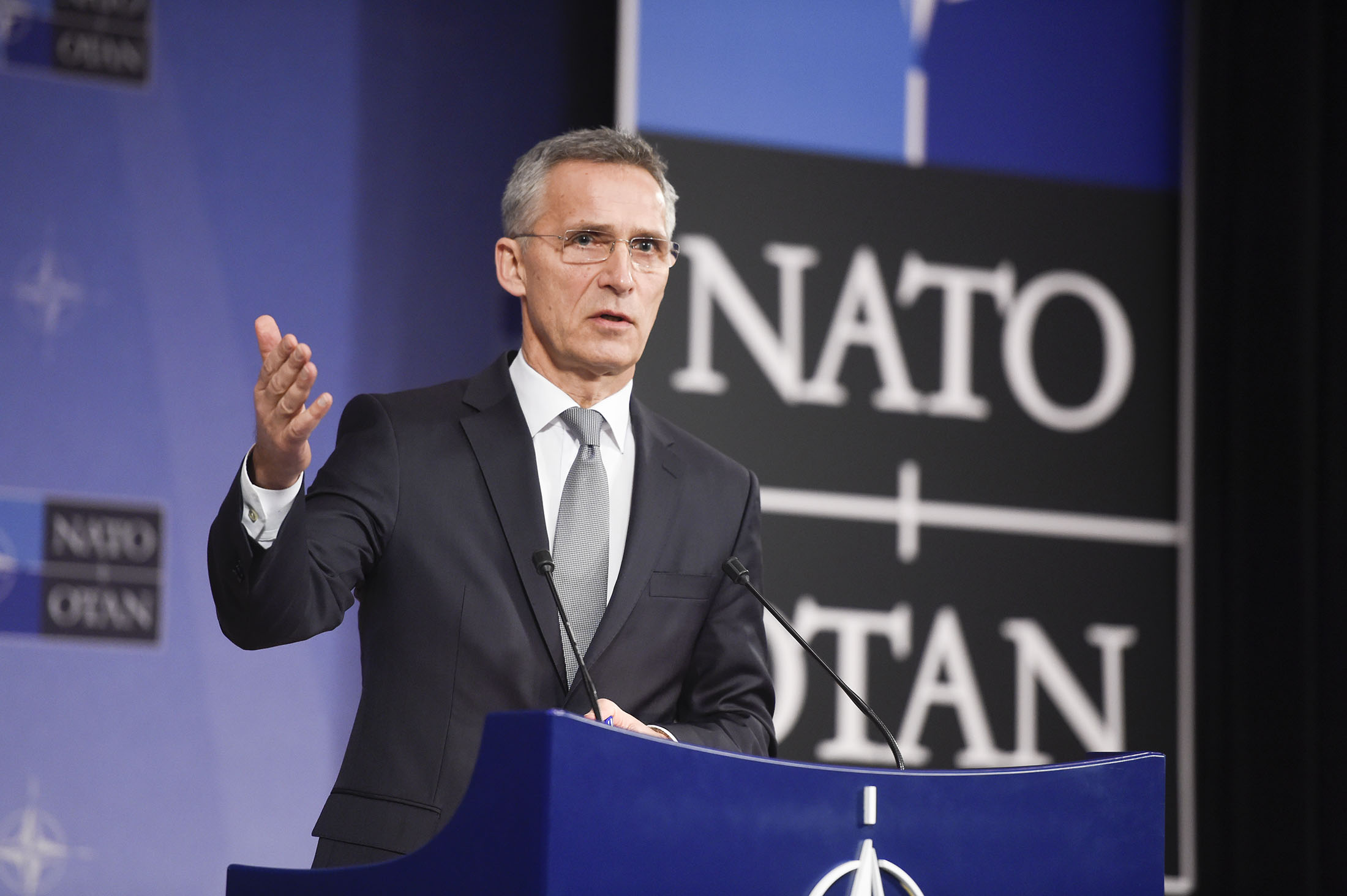 The North Atlantic Council met on Friday (4 September 2020) to address the assassination attempt on Russian opposition politician Alexey Navalny. Germany briefed Allies on the toxicology findings of their specialist laboratory. “There is proof beyond doubt that Mr. Navalny was poisoned using a military-grade nerve agent from the Novichok group,” said NATO Secretary General Jens Stoltenberg.

All NATO Allies condemned the attack and called on Russia to cooperate with the Organisation for the Prohibition of Chemical Weapons on an impartial, international investigation. The Secretary General stressed that the attack on Mr. Navalny is also an attack on fundamental democratic rights and a serious breach of international law, which demands an international response.

The North Atlantic Council has just met to address the appalling assassination attempt on Alexei Navalny.

Germany briefed Allies on the findings of their specialist laboratory.

There is proof beyond doubt that Mr. Navalny was poisoned using a military-grade nerve agent from the Novichok group.

The use of such a weapon is horrific.

All Allies today were united in condemning this attack.

Any use of chemical weapons shows a total disrespect for human lives,

and is an unacceptable breach of international norms and rules.

NATO Allies agree that Russia now has serious questions it must answer.

Those responsible for this attack must be held accountable and brought to justice.

We also call on Russia to provide complete disclosure of the Novichok programme to the OPCW.

Time and again, we have seen opposition leaders and critics of the Russian regime attacked, and their lives threatened.

Some have even been killed.

So this is not just an attack on an individual, but on fundamental democratic rights.

We wish Mr. Navalny a full and speedy recovery.

Our thoughts are with him and his family.

Allies will continue consultations and consider the implications of this incident.

With that I am ready to take your questions.

PIERS CAZALET [Deputy NATO Spokesperson]: And for the first question, we will go to Teri Schultz from Deutsche Welle.

TERI SCHULTZ: My question is: last time there was the allegation that Russia . . . that, that at least Russian nationals used Novichok, albeit on NATO territory, seven Russian diplomats were expelled from the NATO Mission. Yet it appears that if, in fact, Russia is again responsible, that is not a deterrent. So what more can you do to make the perpetrators understand that this will not be allowed? And why, as I’m being asked on my Twitter feed quite a lot, why does NATO believe that it would have a mandate to act in this case for an attack that was not on NATO territory? Thank you.

JENS STOLTENBERG: Because this is a violation of international law and international norms. It’s a use of a chemical weapon. It’s a use of a chemical nerve agent, which is violating the prohibition of any use of chemical weapons. And that matters for NATO. It’s undermining the rules and the norms we have to build peaceful and stable societies on. And it matters also because NATO is based on some fundamental values: democracy, the rule of law, individual liberty. And when we see that the lead opposition politician in Russia is attacked, is tried . . . there is an assassination attack against him, of course it matters for everyone that believes in the rule of law, democracy, individual liberty, as we do in NATO.

That’s the reason why we so strongly condemn the attack. Because it is an attack on an individual, but it is also an attack on fundamental democratic rights.

NATO’s voice matters. We represent close to one billion people. Fifty per cent of the world’s GDP. So it matters when NATO so clearly condemns the attack and the use of a chemical nerve agent.

We will continue to consult amongst Allies. We call on Russia to fully cooperate with an impartial international investigation, because it is extremely important that those who are responsible are held accountable when we see this kind of horrendous use of a prohibited illegal weapon.

PIERS CAZALET: And now we move to Ansgar Haase from DPA.

JENS STOLTENBERG: There are parallels, because we see that a nerve agent, a chemical nerve agent, has been used again, coming from the same group of nerve agent as the Novichok that was used in Salisbury. At the same time, there are differences. This is a Russian citizen that was attacked in Russia. Now he’s in Germany. And I would like to commend Germany for the actions they have taken, the care they have provided for Alexei Navalny and the principled and very strong stand they have had on this issue.

We still have Russian diplomats accredited to NATO. I am not able to give you the exact number now, but we will be able to convey that to you later on.

PIERS CAZALET: Okay, and for the next question, we will move to Lorne Cook from Associated Press.

LORNE COOK: Athens seems to be saying that this deconfliction mechanism is not starting. Do you believe that it will still go ahead? And in what ways do you think this might help calm things down between Greece and Turkey, or stop the kind of confrontations that we’re seeing? Thank you.

JENS STOLTENBERG: I will answer that question in a moment, but let me just add something to my previous answer on the size of the Russian delegation. Following a decision by the North Atlantic Council in 2019, after the Skripal case, the current maximum size of the Russian Mission to NATO is 20. And this was reduced from 30, as we decided back in 2018.

Then, on the situation in the eastern Mediterranean. So, following my discussions with both Greek and Turkish leaders, the two Allies have met already for technical talks here at NATO. The aim of these talks is to establish mechanisms for military deconfliction, to reduce the risk of incidents and accidents in the eastern Mediterranean. No agreement on the mechanism has been reached yet. These are technical talks, rather than negotiations on the underlying disputes between Greece and Turkey. And as such, they are meant to complement, not replace, the efforts led by Germany for political mediation towards de-escalation. Greece and Turkey are valued Allies, and NATO is an important platform for consultations on all issues that affect our shared security. So what we speak about is technical talks to try to establish mechanisms for deconfliction.

PIERS CAZALET: Okay, we will try for one more question from Thomas Gutschker from FAZ. Thomas, can you hear us?

THOMAS GUTSCHKER [Frankfurter Allgemeine Zeitung]: Secretary General, I have a follow-up question to the previous one from Lorne. My understanding is that, for these technical talks, the two parties are not required to withdraw their military vessels from the disputed areas, it’s just about deconflicting them. Now, Greece is telling, Greek diplomats are saying that they still ask for the precondition of any talks that Turkish ships may be removed. Can you please clarify this, whether you’ve got a clear commitment from Greece that they will proceed even when Turkish ships are still in the disputed areas? That’s the first part of the question. And the second is: when and at which level will these talks be held at NATO? Thank you.

JENS STOLTENBERG: Well, these talks have already started, they have already met. And they meet at military level, these are technical talks. And I think that it is important to distinguish these technical military talks from the negotiations that Germany is trying to initiate and create a framework for. The German efforts – and I discussed this also with Chancellor Merkel last week in Berlin – they are aiming at establishing negotiations, addressing the underlying problem and to de-escalate. And that is about addressing the underlying problem of disagreement between two Allies on delimitation lines, the extension of exclusive economic zones in the eastern Mediterranean. That’s one issue. That’s addressed by Germany, which are now conducting mediation efforts to try to get those talks up and running. NATO is not directly involved in those efforts. I support the efforts, but these efforts are led by Germany. They address the underlying problem.