Norway to develop nanosatellite for military tactical communication in the Arctic

Existing SATCOM-systems does not fulfill the requirements for tactical utilization in The Arctic. This is in part due to limited coverage at high latitudes.

The satellite itself is no bigger than a briefcase. An antenna will unfold once the satellite is in orbit.
The Norwegian Defence Research Establishment (FFI) has started a two year research project to solve these issues. The mission will demonstrate military Ultra High Frequency (UHF) tactical communications via a polar Low Earth Orbit (LEO) satellite. FFI has selected GomSpace to develop and build the satellite. The test satellite is to be launched in October 2021. 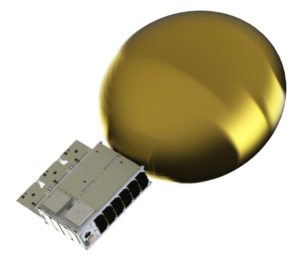 Coverage
For a polar LEO orbit of 600 km altitude, the satellite will be able to cover any point on the Earth’s surface at least four times per day. There may be as many as 15 daily passes at higher latitudes.

Fast track development
One of the project objectives is to test the ability to launch and start operations of a small satellite with an accelerated time schedule. The objective is to launch the satellite within 2 years from project start and 17 months after contract between the industry and FFI.

The mission will function as a pathfinder, seeking current status and realistic views on the availability of technological components for small satellites.